Burger Fuel Group Limited (BFG) is publicly listed on the NZ Stock Exchange as a NZSX company and has been listed since 2007.

FROM LEFT TO RIGHT

Josef Roberts - CEO
Josef is the Group CEO and is responsible for the overall direction and management of the business. Former CEO and Founder of Red Bull Australasia.

Mark Piet - Chief Financial Officer
Mark is the CFO & Company Secretary of BurgerFuel and has been with the company since 2008. Mark is a chartered accountant & a member of Chartered Accountants Australia and New Zealand. Prior to joining BurgerFuel, Mark worked for Deutsche Bank & The Economist in London.

Alan Dunn - Independent Director
Former CEO and Chairman of McDonald’s New Zealand from 1993 to 2003. In 2004 Alan became Chicago based VP Operations, then regional VP Nordics and Managing Director Sweden until his retirement from McDonald's in 2007.

Here you will find links and information on the company as well as your own shareholding. We update this section of the site for our investors on a regular basis.

Latest media releases Visit the BurgerFuel Newsroom to view all The Directors of Burger Fuel Group Limited (BFG) present the unaudited results for the 6 months to 30 September 2019.

(BFG) IS A PUBLICLY LISTED COMPANY

2021 NOTICE OF ANNUAL MEETING OF SHAREHOLDERS

Here you will find links and information on the company as well as your own shareholding.  We update this section of the site for our investors on a regular basis. 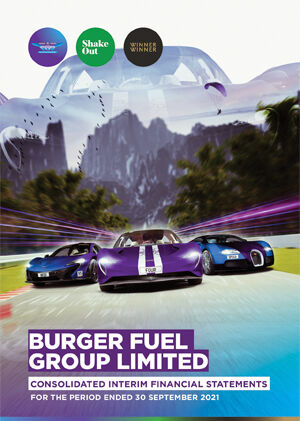